I had heard wonderful things about the previous conference  and knew instantly that this was an event not to be missed.  I was not wrong!

The hotel and conference centre were located on the IU campus in Bloomington. The weekend began with a short walk to the Lily Library.  On display here, among various rare books and maps, were such items as original drawings, scripts, manuscript and much more. 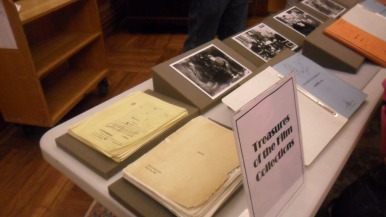 At the IU Cinema, we were treated to the 75th Anniversary screening of “The Hound of the Baskervilles”

This was just how it was meant to be enjoyed – on the big screen – watching it with your fellow Sherlockian friends.

The next day was busy with listening to the amazing speakers.  Discussing everything from theatre, movies, tv and radio.

The breaks between speakers were spent in the dealers’ room, where books, posters, cd’s and other memorabilia were purchased with enthusiasm.

Steven Doyle also had many Sherlockian items from his own personal collection on display.

Getting my book signed by author, David Stuart Davies.

The banquet on the last night was wonderful.

A weekend such as this is  always a wonderful way to re-connect with old friends, and form new friendships. As Eric said, “We are all family”.   All weekend long, we exchanged info and shared stories.  This was Sherlockian fellowship at its best!

One thought on ““Gillette to Brett IV””