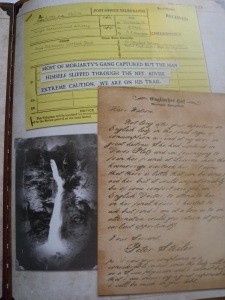 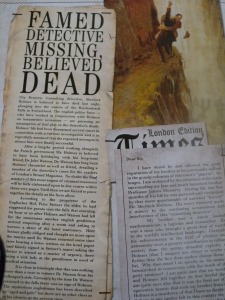 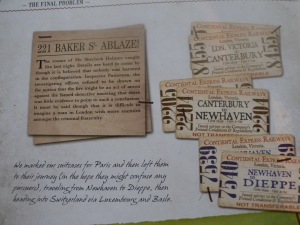 Upon visiting the Reichenbach Falls in 1893, Arthur Conan Doyle decided that this was the place “…that would make a worthy tomb for poor Sherlock, even if I buried my banking account along with him.”

Arthur Conan Doyle claimed that killing off Holmes was self defence, since “…if I had not killed him, he would certainly have killed me.”

20,000 people cancelled their subscriptions to the Strand Magazine!

In 1896 Arthur Conan Doyle wrote: “I have had such an overdose of him that I feel towards him as I do towards pate de foie gras, of which I once ate too much so that the name of it gives me a sickly feeling to this day.”

(from ‘Teller of Tales – The Life of ACD” by Daniel Stashower)

Where? The Columbia Theatre, 530 Columbia Street, New Westminster. Thanks to member Tim for arranging this venue and the food!

* The first person to approach me at the May meeting with the correct answer to the following question will receive a prize!

Q:  On Arthur Conan Doyle’s top 12 list, at which number did he place “The Final Problem”?