On Tuesday, October 6th, the Stormy Petrels will meet to discuss the next 5 chapters of “The Hound of the Baskervilles” 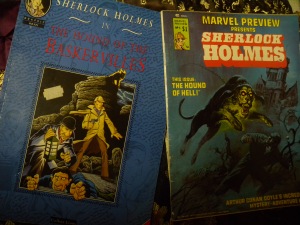 The first 5 chapters gained high marks from the members at the Sept. meeting. Will the next 5 chapters (6 through 10) prove as popular?

“That is the great Grimpen Mire,” said he . “A false step yonder means death to man or beast.”

Who was the woman sobbing in the night? Why was a mounted soldier watching the road? Why did Miss Stapleton utter a warning of “Go back to London!”? What was Barrymore up to at the window late at night?

Enter your name for the book prize draw by answering the following question:

Who is described as “….a heavy, solid person, very limited, intensely respectable, and inclined to be puritanical.”