Four Stormy Petrels crossed the USA border on April 1st. Why?  We were invited to attend a meeting of The Dogs in the Nighttime, the Sherlockian society based in Anacortes, Washington. 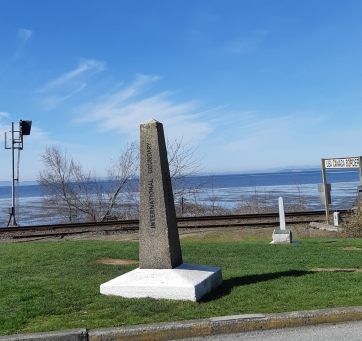 First stop along the way was a visit to Village Books and Colophon Cafe in the lovely historic town of Fairhaven.

Now, back onto the I5 heading southwest to Anacortes. Spotting this sign in the window, we knew this must be the place. We put in our orders for pizza, and headed upstairs. 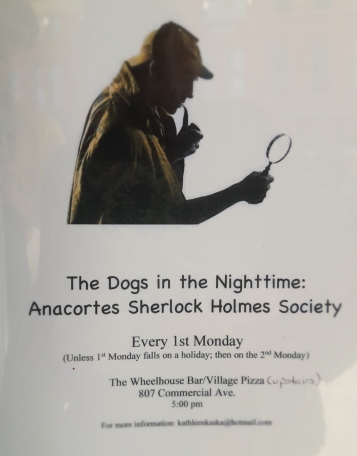 The adventure for discussion at the DITN meeting was Silver Blaze. Several people took part in the discussion including Sonia Fetherston and Don Polvare, both good friends of the Petrels. Also in attendance were Petrels JeanMarie, Brian and wife Leah.  A good showing of Petrels!

President of The Dogs in The Nighttime is Kathleen Kaska, a gracious hostess and well-known author. Many thanks for the invitation!

Before departing, the four Sherlockian Musketeers paused for a photo op. Paparazzi everywhere!

It is always a pleasure to get together with our dear friends south of the border!