“The Adventure of the Spook House”

The year is 1922 and two friends, Sir Arthur Conan Doyle and Harry Houdini team up to solve a disappearance.

Kidnapping, murder and mystery! A client with a gripping tale asks “Sherlock Holmes” to help him find an old friend who vanished in ‘the spook house’.

It is evident that Mr. Forsyth had done his research into the history of Doyle and Houdini.

I definitely enjoyed the read, and can recommend it. 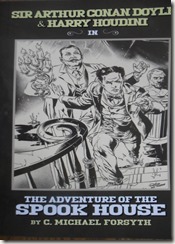