The Sherlock Holmes Birthday Brunch, held on January 4th was another success. A good turnout (16 members, including guests) plus Tim  brought a birthday cake! 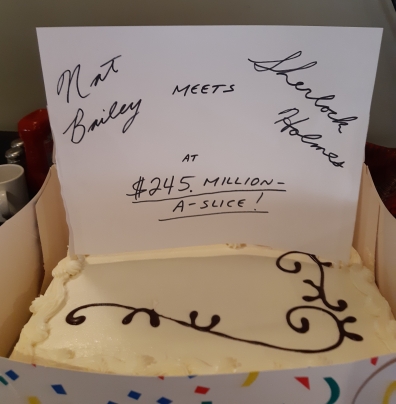 The private Fireplace Room was, as always, a perfect location for the event, and the manager, Jake Mees donated three $30 gift certificates for any White Spot Restaurant for door prizes.  Fran distributed a quiz, and the member with the most correct answers will receive one of these certificates.

Membership dues for 2020 were also collected.  (Any questions on membership and dues, please contact Fran)

Now back to our regular study sessions!

Our case for discussion will be Part 1 of the very first story featuring Sherlock Holmes.  It is the most important (in the eyes of this reviewer) as it is the beginning of one of the greatest partnerships of all time!

Watson:  “Sherlock Holmes seemed delighted at the idea of sharing his rooms with me.”

Holmes:  “I have my eye on a suite of rooms in Baker Street which would suit us down to the ground.”

And so the adventures begin!

On April 1, 1886 Mrs. Doyle wrote to her husband’s sister: “Arthur has written another book, a little novel about 200 pages long, called A Study in Scarlet…”

Vincent Starrett said:  “that lurid paperback is today one of the rarest books of modern times – a keystone sought by discriminating collectors in every corner of the earth.”

Dorothy L. Sayers said:  “A Study in Scarlet was flung like a bombshell into the field of detective fiction.”

So, as young Stamford, who introduced Dr. Watson to Sherlock Holmes. said:  “You must study him…”  and Watson did study him, as do we ’til this very day.

If you have any questions, please contact Fran at”  franziskah@shaw.ca

Bonus Question for those attending the meeting:  What were the original names of Holmes and Watson?

If you have any comments or questions about The Stormy Petrels of B.C., or a contribution for the Petrel Flyer, please send a message to thestormypetrels@gmail.com