The Stormy Petrels will “meet” via an e-mail invitation to Zoom.

We will be discussing the first 7 chapters of “The Sign of Four”  written in 1889. 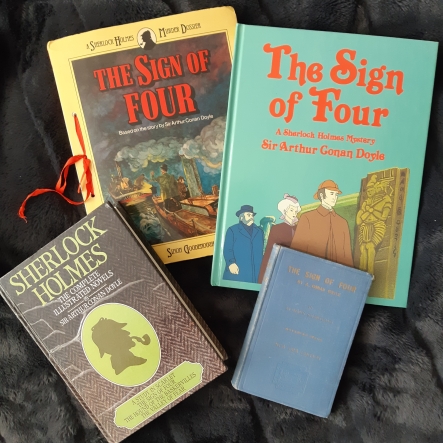 At a dinner at the Langham Hotel, ACD met with the editor, Joseph Stoddart, of Lippincott’s Monthly Magazine based out of Philadelphia. Another author attended the dinner.  Oscar Wilde, who also agreed to write for Lippincott’s. His result was “The Picture of Dorian Gray”.

There was one other man who dined with Doyle, Stoddart and Wilde that evening.  Who was he? E-mail Fran with the correct answer.

This story received some very good reviews, and why wouldn’t it?  It has a locked-room mystery, a mysterious Islander, a man with a wooden leg, a tracking dog, a boat race on the Thames, murder, treasure, and of course, romance!

The e-mail invitation will be sent shortly before Tuesday, May 5.

You will be asked to join the meeting at 7:00 PM (don’t forget to add audio – un-mute the mic)

I look forward to seeing as many Petrels as possible join in.

If anyone would like to join in as a guest at our meeting, please e-mail Fran so you can be sent the invitation.

If you have any questions or concerns, please e-mail Fran at:  franziskah@shaw.ca